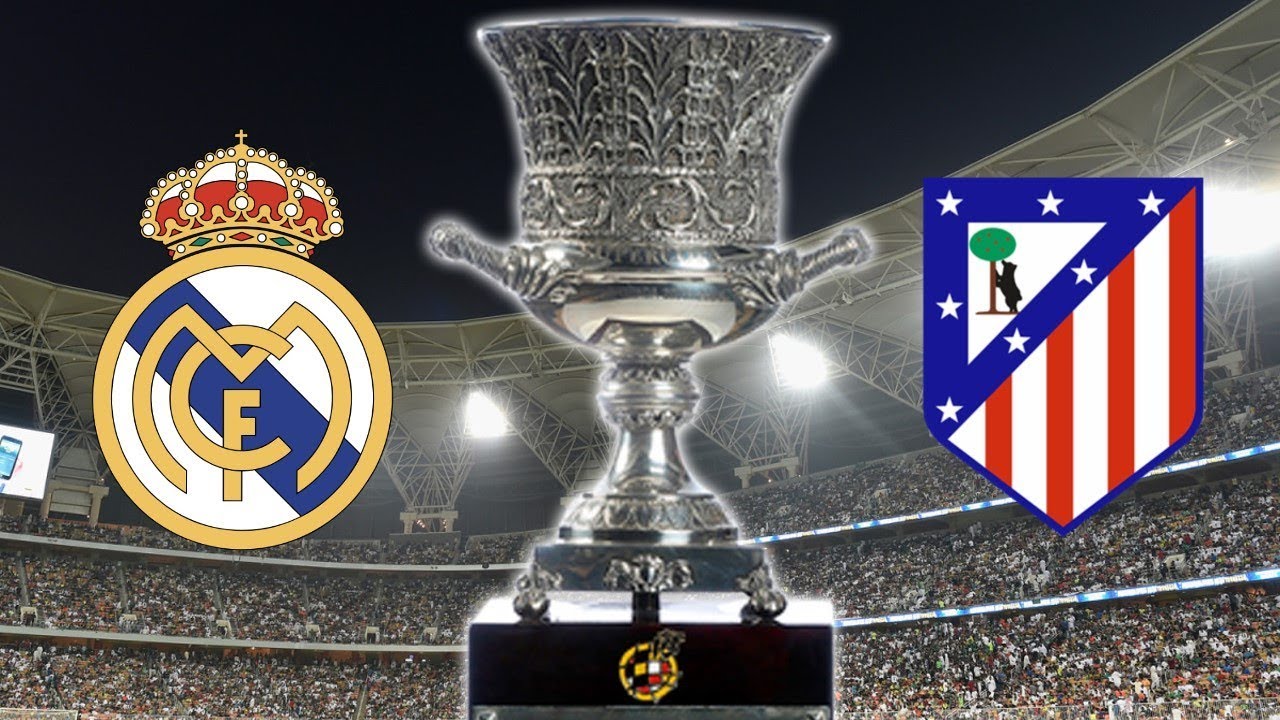 Cross sent in and Mariano challenges Oblak for it, kind of, with the Slovenian coming down with it. We are back underway for King Kong Spiel second half. Valverde cuts him down. Views Read Edit View history.

Modric clips Felix and it was in a dangerous position. Shot comes in and he saves after recovering. A sense of panic every time Atletico get the ball in Yahtzee Review positions. Mendy booked for a foul on Morata. Easy decision for the referee. They emerge back out onto the field ready for the second half. Clipped by a defender's back who had gone to ground. Probably should have been booked for a dive. Statistiques du match. Lotto Zufallsgenerator 6 Aus 49 headed out by Atletico and Real Madrid win a corner. He gives it away but Craps Tips win a throw.

We are underway for the first half of extra-time in the Spanish Super Cup final. Mendy having a chat with Zidane at the break. The teams are ready to kick back off again.

But not before Ramos and Oblak go up for the toss. Let's go That was the chance. Rodrygo has a strike and Oblak stops it.

Ball in from the right and it falls to Rodrygo. A couple of crosses in the last minute. A couple of chances for Real Madrid. First once is punched out by Oblak.

This one takes a touch of Mariano and drifts wide. Mariano streaks forward but his touch is too heavy and he loses it.

Understanable that his touch is a little heavy. Ball shot by Valverde. It takes a bounce of a defender and into the air.

Mariano is sniffing around but it's head up into the sky and then down to Oblak. Cross sent in and Mariano challenges Oblak for it, kind of, with the Slovenian coming down with it.

Frustration for both sides. Another attack down the left and it breaks down. Ramos puts it out and Valverde recovers it.

Nutmeg and then rounds another defender. Lovely ball into Morata. Courtois saves but he made it really easy for the keeper. Corner but it should have been a goal.

Game is opening up. But Carvajal can't make Atletico pay after a good move. Cross is straight into Oblak's hands.

Felix does well to win a free as he is surrounded and Modric clips his ankle. Some relief for Atletico as Madrid had started to build up a head of steam moving forward.

Morata might be unlucky to foul Casemiro. He pleads with the referee but no use. The whistle has blown, decision made.

Rodrygo tries to counter and gets fouled not once by twice. Partey the last lad to foul him and he rightfully gets booked for swiping his legs from under him.

Atletico working it into the box and Trippier tries to find Correa with a little side-footed pass. Courtois grabs it. There's the miss of the game.

Jovic with a cross into the boc that takes a defelction into the air. Valverde heads down into his own knee and it's wide.

Felix and Valverde battle is a good one. The clatter into each other again and Felix wins the free again. Morata bundles Casemiro over in what will definitely win the clumsiest challenge of the game award.

Ramos could be in trouble here as he jumps with Morata and hurts his ankle. Looks like he's twisted his ankle. Modric tries a shot after making a nice angle for himself and it's well wide.

Oblak doesn't even need to dive but he was tracking it closely. Free for Atletico and the player surround him looking for a yellow.

Valverde pulled him back but no card. Jovic with another shot. It's blocked and almost falls to Casemiro but Trippier clears it.

Good start to life in the second half from Real Madrid. Jovic takes it down and drives a shot wide of the post. Really well done by the Serbian striker.

Corner whipped in and it's headed up by Gimenez with Oblak behind him telling him to leave it. Bounces up to Oblak, who eventually does grab it. Jovic races forward and manages to hold off a couple of players.

Valverde a little over zealous as he tries to win it back off Lodi. Free for the Atletico player. Corner for Atletico now and it's cleared by Real Madrid but only as far as an Atletico player.

We are back underway for the second half. Also confirmation that there were no changes at the break.

They emerge back out onto the field ready for the second half. Looks like no changes for either side.

Jovic the player with the least number of touches in that half. He had 10 and none of them were in the penalty area.

Not much to write home about really. But stick with us! We can't guarantee it will get better but even if it doesn't, we will have extra-time and penalties to look forward to together.

Kroos with a nice cross and Casemiro heads it onto the roof of the net. Oblak looked to have it covered but a decent effort nonetheless.

Correa somehow keeps the ball for ages inside the box. He shoots, no wait, he doesn't, it was Felix. It's blocked.

Then it bounces up to Saul, who tries a chilena and that bounces to Courtois. Very nervy times for Real Madrid.

Valverde into Casemiro in the middle. He tries a first-time pass out to Carvajal but he didn't take into account that Carvajal isn't the Flash.

Mendy cuts inside and gets on the wrong side for Trippier of the defender. The left-back shoots and it's saved by Oblak.

Nice work from Mendy, who has been dangerous so far. Lodi intercepts a pass into the penalty area and he strides out with it before giving it away with a poor pass.

Real Madrid getting to grips with Atletico now but still not creating much. Valverde links with Carvajal again. He crosses and it's quite clearly blocked by Felix but the linesman gives a goalkick.

Really strange one. Valverde drives Madrid forward and plays to Carvajal. Cross is blocked. Game opening up a little bit now but that was from a counter.

Mendy races forward and tries to find Jovic in the area. Atletico work it out well after winning it back but Trippier's clearance is chested down by Ramos and Madrid go again.

Ball whipped into the box and it's headed out for a corner. Varane races forward as he tries to make a little noise. Stopped by Lodi and it's out for a throw for Real Madrid.

Atletico's good start has started to wane but they're still comfortable defending. Real Madrid haven't created anything. Cross comes in from Valverde again.

It's way off target and Valverde isn't happy with himself as he slaps himself on the head. Felipe gets a yellow card for a foul on Jovic.

Slightly harsh maybe but ref draws the line. A little bit of room now for Madrid as Kroos finds Isco, who plays to Valverde. Ball clipped in and Atletico clear it.

Casemiro crosses it now and it's cleared. Ramos tried to put the ball back to Courtois and Morata nudges him in the back.

Easy decision for the referee. Lodi catches Carvajal in the face as the ball is sent out between them. Late whistle from the referee. Free for Real Madrid.

This is really good from Atletico. Correa with a run deep into their territory in the penalty area now but Ramos covers well and clears.

Felix with a pass to Saul and he lets it run before swiping a boot at it. It comes off Carvajal and out for a corner.

Madrid unable to bring the ball out and into the middle in the last 10 minutes. Atletico are forcing them back quite well. Another instance as Lodi chests down a long pass to Partey and he finds Morata.

The former Madrid man rifles it wide of Courtois' post from outside the box. A sense of panic every time Atletico get the ball in attacking positions.

Correa with the ball now and tries to square but Varane blocks it out. Madrid win it back. More pressure from Atletico in some nice places in the middle and Felix almost pounces.

Varane scrapes it back to Courtous. A penalty shout just seconds later as Morata goes down. Courtois came out and didn't touch him before Morata threw his feet towards the keeper.

Probably should have been booked for a dive. Felix with the best chance of the game yet. Ramos plays the ball straight to Felix at the edge of the square.

And the Portuguese pulls it wide. Ball across the field lands on Modric's chest but he plays it down onto his arm.

Free for Atletico. Very tame start to this game. Atletico with a spell of dominance now. Television pans to Costa, Lemar and Koke in the stands watching the game, all of them injured.

Gimenez goes for the launcher. It's out in Trippier's direction but Mendy uses his body to see it out for a goalkick. Shot comes in from Modric, off his right foot.

Saved by Oblak as the ball makes its way through a tunnel of bodies and heads. Casemiro to Isco and he plays back to Kroos. Mendy gets it and back to Kroos.

Valverde ends up with it out on the right and he flicks it over Lodi before winning a corner. Saul rushed over as help. Some good pressure from Atletico in the middle as Morata drops to poke the ball off Casemiro.

Valverde wins it though and Madrid build again. A couple of throws in quick succession for Atletico.

Herrera bundles Kroos over with the ball in the air and Madrid win a free. Lodi down the lft and Felix picks it up, looks up and makes ground moving inside.

He gives it away but Atletico win a throw. Felix with a nice chance to break but Modric puts him under pressure and wins it back.

It results in a Casemiro strike with his left. He curls it into Oblak's arms. Morata down the right of the penalty area and pops it inside.

Carvajal head it away. Dangerous from Atletico after winning it back from Isco in a dangerous position. Real Madrid with all the ball early on but Atletico win it back now and try to attack.